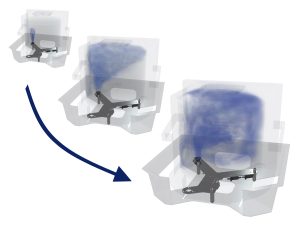 The company unveiled the new system at SEMICON West 2014 today, where it is conducting live demonstrations of the FOUP Purge System at the booth of Silicon Saxony and the Saxony Economic Development Corporation in South Hall, booth # 1829.

FOUP (Front Opening Unified Pod) is a specialized enclosure designed to hold silicon wafers in a controlled environment between process steps. The FOUP Purge System floods the FOUP with a constant flow of nitrogen during the interim storage period, flushing out harmful contaminants that can damage wafer surfaces.

Purging is a critical step and traditionally required a separate tool in the fab.  Since the FOUP Purge System can be easily retrofitted to existing storage modules, the purging process no longer needs a separate station, resulting in cost savings and a zero footprint in the fab.

“At 28nm process nodes and below there is a dire need for protecting sensitive wafer surfaces against oxidation and other unwanted chemical reactions.  With these ultra submicron geometries, humidity, ambient oxygen and even the slightest emission of molecules can cause surface defects, yield loss and other detrimental consequences,” said Mr. Ulrich Spannring, head of sales for Roth & Rau – Ortner.  “Our FOUP Purge System is unique in that it provides permanent contamination protection via a constant flushing of the system during the entire time the wafers are stored, significantly reducing chances for surface contamination to cause problems.  Also, since it can be easily retrofitted with existing FOUP storage systems, installation can be done during regular operations and no change is required to the fab structure or additional space needed.”

As a global company, Roth & Rau – Ortner employs 110 people at its sites in Dresden, Germany, and Salt Lake City, Utah.  Ortner operates as a full subsidiary of Roth & Rau AG and has been a member of the Meyer Burger Group since 2011.

PHOTO CAPTION:  The Purge System by Ortner avoids oxidation and other chemical reactions by purging the FOUP with an inert gas during interim storage between process steps.